If animals are seen as rational (in a Darwinian sense) in contrast to man’s irrationality, it is because they have adapted perfectly to their surroundings, therefore aiding in their survival.  But in ancient Egypt, animals were seen as rational because their forms were perfect representations of their cosmic functions.  An animal’s joy was made complete in fulfilling its instinct; a cow chewing its cud, a cat toying with it’s prey, a horse galloping freely across the plain. 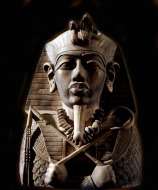 concerned with man becoming a “king,” one who assumes complete control over his lower nature.  The animals represented specific functions and instincts incarnate within mankind.  In her “Journey Into the Light” she states:

The forces of instinct are the expression of essential functions (cosmic functions).  Incarnated in animals they are neither good nor bad, but inherent to their nature.  Within each species they operate accordingly.  Only man has the power – and therefore the responsibility – to control the extent to which he comes under their influence.

In her novel, “Her-Bak,” Schwaller de Lubicz explains how the process of transformation of animal instincts within the human being takes place:

The animal in which (it’s) characteristics are incarnate to such perfection is therefore more than an image: it is the living symbol of the Neter (function)…. As for the cult of veneration which we pay the sacred animals, it is rendered to them as to earthly expressions of a cosmic functional property…. (An aspect of animal worship) serves to educate man toward becoming conscious of the universal functions incarnated through each of those “species…” 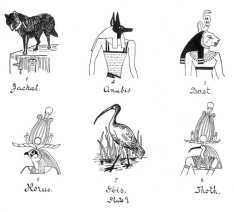 I am reminded here of why it was given to Adam to name the animals.  This was a process of personal inventory of the functions he observed within himself.  He was able to “name” the animals because they represented instincts that dwelt within his very nature.  Schwaller de Lubicz continues…

You will still have to acquire knowledge of the structure of the human being before you can really interpret the… object of the animal cults; for this object is the development in man of the ideas, and later the consciousness of natural functions, so as to teach him the path of their total Consciousness, of which he will finally have to become aware within himself.

The more a man is still an animal, the more useful it is to him to relate himself to the ‘functional type’ corresponding to his own nature.  As his superior Consciousness progresses, it makes him more and more independent of the inferior states and their influences, and finally he will have to acquire complete domination over them.  The human elite (those who would endure suffering in the pursuit of wisdom) discerns this progress in the transformation of animal cults, when man seeks to replace them by human images until he at last arrives at the idea of the Spirit without images or formulas.

There was one who spoke openly about worshiping without images or formulas:

“God is Spirit, and those who worship Him must worship in spirit and truth.” –John 4:24

Until next time, peace…

We now move into Chapter 2, titled “The Messianic Mission of Jesus.”  The chapter begins with an exploration of the cultural and world context from which Jesus’ thought and ethic grew…

Schweitzer says, “The ideal would be that Jesus should have preached religious truth in a form independent of any connection with any particular period and such that it could be taken over simply and easily by each succeeding generation of man. That, however, He did not do, and there is no doubt a reason for it.”

A look at the world in the time of Jesus may reveal the reason, for more assuredly  He did not ignore its thought patterns.  The question is – how much of the world and of its prevailing beliefs did he know?

One must pause here to consider the multi-cultural influences that permeated the Middle East at the time of Jesus.  The trade route of the Silk Road was the conduit for ideas in all realms of human experience, and the Middle East sat right at it’s crossroads.

From the Asia Society’s website: “The religious beliefs of people along the Silk Road at the beginning of the 1st century BCE were very different from what they would later become. The peoples of the Silk Road in its early decades followed many different religions. In the Middle East, many people worshiped the gods and goddesses of the Greco-Roman pagan pantheon. Others were followers of the old religion of Egypt, especially the cult of Isis and Osiris. Jewish merchants and other settlers had spread beyond the borders of the ancient kingdoms of Israel and Judea and had established their own places of worship in towns and cities throughout the region. Elsewherein the Middle East, and especially in Persia and Central Asia, many people were adherents of Zoroastrianism, a religion founded by the Persian sage Zoroaster in the 6th century BCE. It posited a struggle between good and evil, light and darkness; its use of fire as the symbol of the purifying power of good was probably borrowed from the Brahmanic religion of ancient India. The Greek colonies of Central Asia that had been left behind after the collapse of the empire of Alexander the Great had, by the 1st century BCE, largely converted from Greco-Roman paganism to Buddhism, a religion that would soon use the Silk Road to spread far and wide. In India, on side routes of the Silk Road that crossed the passes to the Indus Valley and beyond, the older religion of Brahmanism had given way to Hinduism and Buddhism; the former never spread far beyond India and Southeast Asia, while the latter eventually became worldwide in extent.”

In truth there is no way to define the type and limits of Jesus’ education.  After the report of his visit to the temple at twelve years of age, with His parents, it is said, “And he went down with them, and came to Nazareth, and was subject unto them…”  Here the record breaks off and takes up again with the ministry of John the Baptist.  Within the years lost to the record, Jesus coud have traveled to the ends of civilization and back; studying along the way – or in neighboring cities He coud have studied the cultures and philosophies of East and West.  In the Gospels there is a statement that could be interpreted as an indication that Jesus was away for 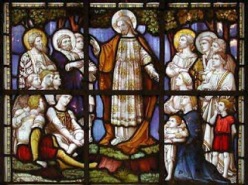 many years: when he goes to His native place to teach and heal, people do not seem to know for sure who He is – which is to say, they ask, “Is this not the son of the joiner?”  Strange question to ask, even to express incredulity, had Jesus lived there since childhood and been away but a short time.  Because the townspeople know His family so well, they are offended at His brilliance even though they are astounded at His teaching.

He goes on to say:

There is a similarity, however, between (Jesus’) words and those of other philosophers.  Renan attributes this to “secret channels and…that kind of sympathy which exists among the various portions of humanity…conformable to the instincts and wants of the heart in a given age.”  Is this indicated, considering all that surrounded Jesus and His inquisitive, discerning mind?… In many ways His approach resembles that of Socrates, who, as Robert de Ropp describes him, followed the bidding of his “inner voice” endeavoring at all times “to lead men to truth by

questioning.  And the truth he valued most highly related not to externals but to the laws that govern man’s inner being.”  In discussing ancient Greece, Edith Hamilton points to Plato’s philosophy: “Freedom is no matter of laws and constitutions; only he is free who realizes the divine order within himself, the true standard by which a man can steer and measure himself.” (emphasis mine)

And here we have the impetus to jump into how Jesus saw his Messianic role, which we will explore more in depth beginning with the next post.  Until then, peace…